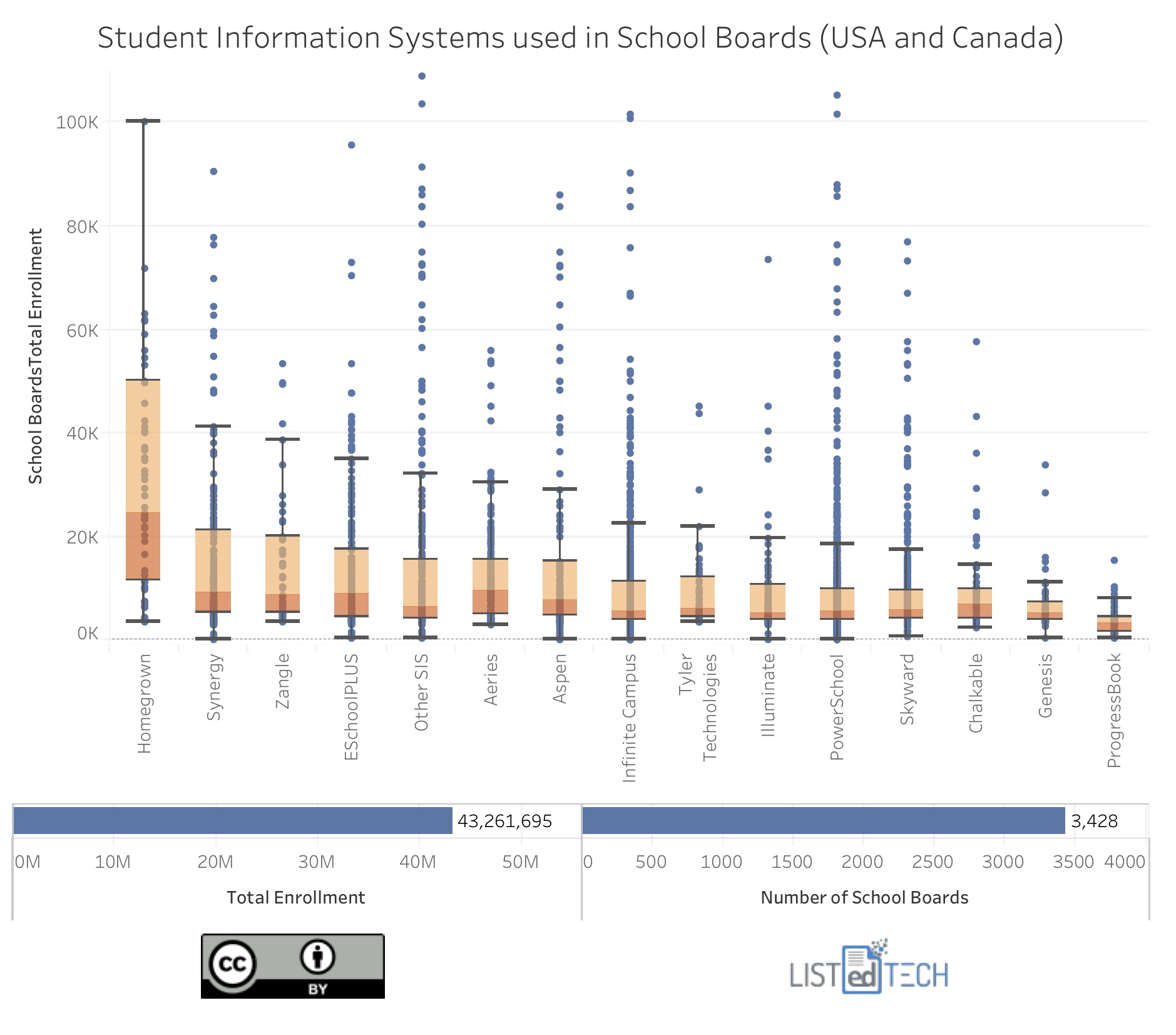 Last year, in conjunction with MindWires / e-Literate, we started collecting K12 school board usage data for Learning Management Systems (LMS), Email systems and Student Information Systems (SIS). Unlike LMS and email systems, the SIS used in K12 are completely different from the higher education systems. Very few SIS companies look to have a product that can be used for all levels of student management.

In order to understand Box-and-Whisker Plot graphs, here are a few explanations.

Now the ‘whiskers’ are the minimum and maximum of the “standard” data set, represented by dark black lines in the graph.

Over and below these whiskers are the outliers; the data-points that are considered out of the norm and which are outside the box plot. As you can see, several points are out of the norm and some do go higher. I just cut the top of the graph to make it clearer. If you see lots of lines outside the whiskers (example PowerSchool), it’s because they have a high concentration of institutions between the whiskers.

The data used is from the biggest K12 school boards in Canada and in the United States. I’m making sure that this is understood since we are still in the process of getting the information of the smaller (ie. total enrollment of under 3,000 students) school boards. We don’t have all school board but this data represents over 70% of the estimated 56.6 million students in USA and 5 million in Canada.

We are showing the top 14 systems (top being the most implementations). The others have been grouped in (you guessed it) “Other SIS”.

If you look at the chart below, you will find ‘homegrown’ followed by Synergy on the left with the highest upper quadrant meaning that the product has a high % of large school boards using their system. On the right side of the chart, you find ProgressBook and Genesis with the smaller school boards.

What will happen once we add more school boards?

If we assume that the same 14 products remain, the data will be pulled down; meaning that the upper extreme of the whiskers will not be as high. Another good assumption would be that new players will appear from our group of “Other SIS” to become one of the top systems.

LMS data will be coming out this Spring – watch for updates.

ListEdTech is pleased to announce that Eric Stoller is joining the company as our Chief Evangelist. With 20 years of experience in higher education marketing, student success, and edtech, Eric is perfectly suited to help us scale as a leading edtech market research firm.  “Eric’s knowledge and passion of the industry will help us better END_OF_DOCUMENT_TOKEN_TO_BE_REPLACED  Read More

On Friday, June 24th, 2022, several websites specialized in financial news announced a huge acquisition: Zendesk agreed to be acquired by a consortium of private equity firms for an amount between 9.5 and 10.2 billion dollars, depending on the news source. In the education sector, Zendesk is the leader of the help desk product category END_OF_DOCUMENT_TOKEN_TO_BE_REPLACED  Read More

On June 14, 2022, at least three HigherEd-oriented websites (Inside HigherEd; Higher Ed Dive; EdScoop) published articles stating that investments in the SIS product group doubled in 2021. The authors referenced a report by the Tambellini Group. In this post, we want to add some data insights on SIS implementations available in our database. For END_OF_DOCUMENT_TOKEN_TO_BE_REPLACED  Read More