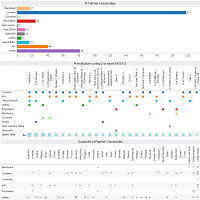 See new and updated versionI have updated the visualisation with the most recent information, added 2 new Moocs and added 5 world university rankings

MOOC (Massive open online course) systems have been all the rage for the last year. The number of students and high dropout rates have been highlighted and analysed. The firms investing in each system and the capital invested have been scrutinized. Speculations on monetisation of the different systems is ongoing and this week, 5 classes have been approved for credit recommendation by the American Council on Education.

Final word All 3 systems have hand-picked their partnering institutions. Seventy percent of the universities are on the Times Higher Education top 200 World University Rankings 2012-2013. Eighty-two percent (82%) of Coursera’s partners are in the Top200 University rankings compared with edX at 38.5% and Udacity at 60%. In the ranking’s top 5, only the University of Oxford is not part of any of the 3 MOOC that we are looking at. I cant wait to see who will recruit it.

ListEdTech is pleased to announce that Eric Stoller is joining the company as our Chief Evangelist. With 20 years of experience in higher education marketing, student success, and edtech, Eric is perfectly suited to help us scale as a leading edtech market research firm.  “Eric’s knowledge and passion of the industry will help us better END_OF_DOCUMENT_TOKEN_TO_BE_REPLACED  Read More

On Friday, June 24th, 2022, several websites specialized in financial news announced a huge acquisition: Zendesk agreed to be acquired by a consortium of private equity firms for an amount between 9.5 and 10.2 billion dollars, depending on the news source. In the education sector, Zendesk is the leader of the help desk product category END_OF_DOCUMENT_TOKEN_TO_BE_REPLACED  Read More

On June 14, 2022, at least three HigherEd-oriented websites (Inside HigherEd; Higher Ed Dive; EdScoop) published articles stating that investments in the SIS product group doubled in 2021. The authors referenced a report by the Tambellini Group. In this post, we want to add some data insights on SIS implementations available in our database. For END_OF_DOCUMENT_TOKEN_TO_BE_REPLACED  Read More