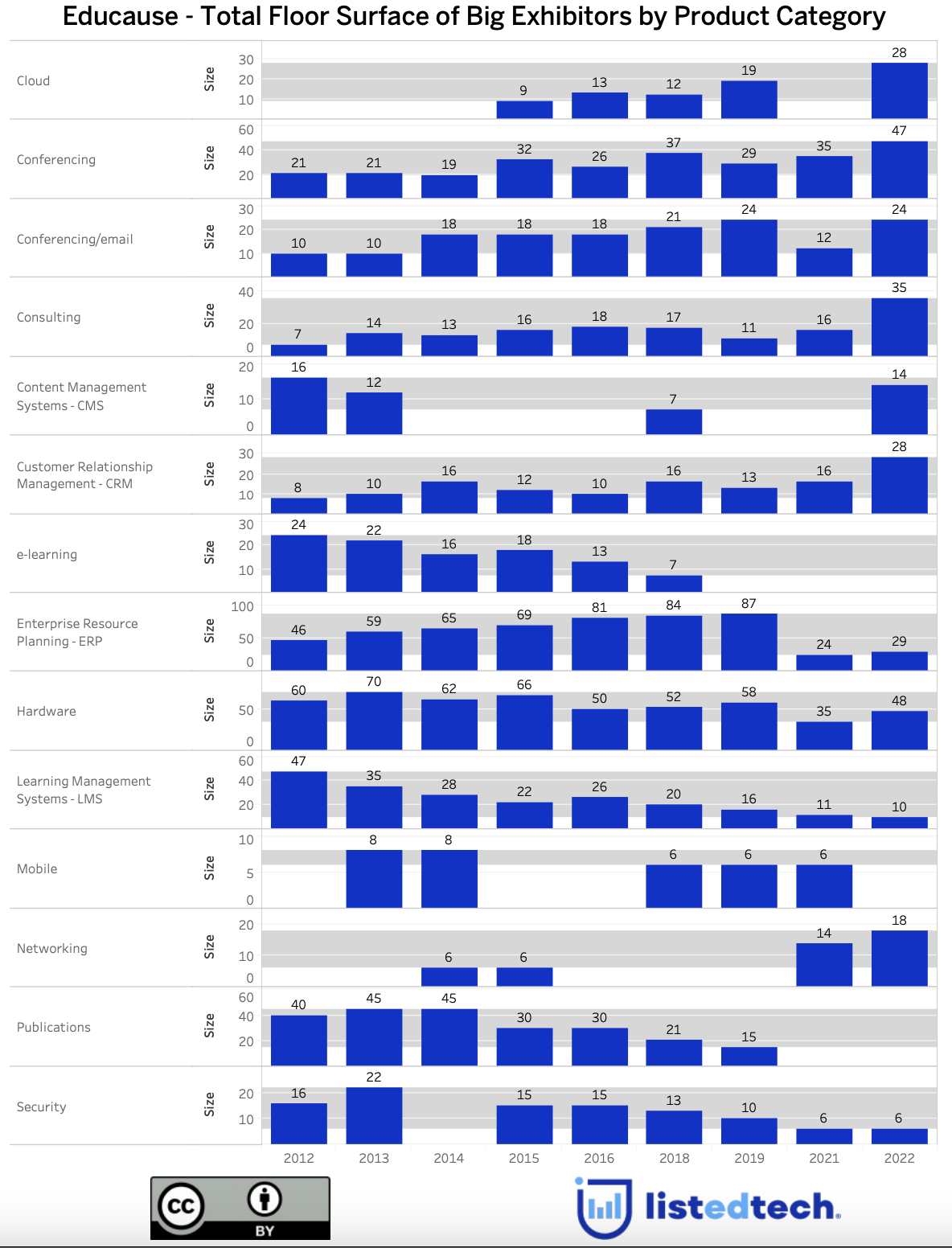 This week, it’s Educause annual conference with its second in-person participation after the online-only pandemic year. After the 2021 conference, we wrote about the floor plan possibly reflecting the market trend. Will this year’s floor plan show the same results?

I first retrieved all floor plans and exhibitors’ lists since 2012 (except for 2017 -not available- and 2020 -no in-person conference). I then looked at all the bigger booths and listed them. I consider a big booth covering six squares or more on the floor plan (the smallest possible booth being one square). Please refer to the table below to understand the most common area size used on the floor plan: the numbers in italics (right columns) are what I consider the big exhibitors.

As previously mentioned, the year 2017 was not retrievable, and I decided not to include 2020 in this analysis because the conference was 100% virtual, making things harder to compare. Let’s add an important note before going into the analysis. Although the in-person sessions and the exhibitors’ hall are back, the conference’s virtual component is still an option preferred by many participants. Also, it is unsure if companies still have corporate policies related to COVID-19 and have decided to refrain from participating in face-to-face conferences and fairs. Most likely, this is a thing from the past but it could still impact the exhibitor participation.

The Presence of Specific Product Categories

Looking at the graph, we can see that some product categories disappeared over the years while others took bigger booths. Please note that a product category must have more than one company selecting a big kiosk during the analysis period to be included in this graph. For this reason, you won’t see Business Intelligence, Furniture or Proctoring in the product category graph.

How Acquisitions and Financial Struggles Impact the Floor Plan

The more I examine the Educause floor plan data, the more I notice that the economic cycles impact the annual conference. Some companies appear or disappear following a merger or an acquisition.

Based on these nine years of data, I can say that the Educause floor plan is unsurprisingly linked with the market trends. We have noticed that when misfortune hits a company, the following Educause annual conference is somewhat impacted. Overall, when a company does well, it seems to want to invest in a larger booth to increase its visibility and networking. A case in point is Zoom, which saw record sales in the pandemic years and has bought a 9-square kiosk this year, its first-ever purchase.

Note: we have verified the floor plan information on October 10, 2022.

The Online Program Management (OPM) product category has changed in the past few years. Contrary to most product groups, the OPM market is now dominated by smaller players, grouped in the ‘Others’ in our graph jargon. Where are the previous leaders? Has the pandemic altered this category? Dr. Carl Sagan once said: “You have to END_OF_DOCUMENT_TOKEN_TO_BE_REPLACED  Read More

For the past couple of years, we have been tracking RFP data to help us better understand future trends in system implementations. Because of the nature of a request for proposals, this data also gives us an additional indicator of which institutions might change their systems, which is our core business. Since the first iteration END_OF_DOCUMENT_TOKEN_TO_BE_REPLACED  Read More

Community colleges are often an afterthought in the HigherEd world. Yet, in the United States, there are almost 1,500 institutions, and in Canada, a little over 200. These community colleges north of the 28th parallel register more than 5.5 million students. It is time to specifically showcase community colleges in a post. Today, we want END_OF_DOCUMENT_TOKEN_TO_BE_REPLACED  Read More