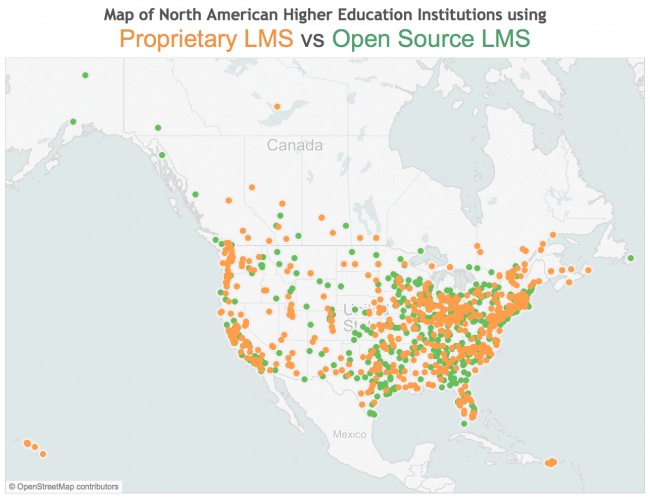 Oftentimes, the choice for a new Learning Management System (LMS) is dictated by cost considerations. That requirement will divide the choices at your HigherEd institution’s disposal. We’re proposing below an exploration of those 2 distinct markets: proprietary LMS and free LMS / open source LMS.

Splitting the LMS Market Between Open Source and Proprietary

Dominating Players in Each Market

Of the more than 6000 active LMS entries we have in our records for worldwide institutions, the split between the use of open source vs proprietary LMS is almost 50/50.

For each market, one vendor dominates its category with 60% of market occupation or more. Blackboard dominates the proprietary market while Moodle leads the open source market.

Our 50/50 split is worldwide, but each geographical market has their own distinctions. For North America, proprietary LMS vendors occupy 61% of the overall market, leaving only 39% to open source.

The top 3 open source LMS used in North America are:

The top 3 open source LMS used in North America are:

Follows a map of the different type of LMS that are currently active in North America. We can see that there are regional clusters of adoption of proprietary vs open source systems.

Because not all HigherEd institutions are the same, we should look at how the market is split between proprietary vs open source LMS based on institutional attributes.

We’re only scratching the surface here. LISTedTECH provides an unprecedented access to the best LMS market data out there.

ListEdTech is pleased to announce that Eric Stoller is joining the company as our Chief Evangelist. With 20 years of experience in higher education marketing, student success, and edtech, Eric is perfectly suited to help us scale as a leading edtech market research firm.  “Eric’s knowledge and passion of the industry will help us better END_OF_DOCUMENT_TOKEN_TO_BE_REPLACED  Read More

On Friday, June 24th, 2022, several websites specialized in financial news announced a huge acquisition: Zendesk agreed to be acquired by a consortium of private equity firms for an amount between 9.5 and 10.2 billion dollars, depending on the news source. In the education sector, Zendesk is the leader of the help desk product category END_OF_DOCUMENT_TOKEN_TO_BE_REPLACED  Read More

On June 14, 2022, at least three HigherEd-oriented websites (Inside HigherEd; Higher Ed Dive; EdScoop) published articles stating that investments in the SIS product group doubled in 2021. The authors referenced a report by the Tambellini Group. In this post, we want to add some data insights on SIS implementations available in our database. For END_OF_DOCUMENT_TOKEN_TO_BE_REPLACED  Read More