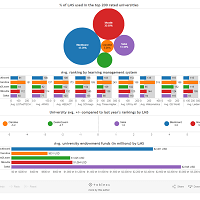 In my last post, I identified the top 200 universities. To do this, I compiled 8 world rankings and averaged out the rankings to find the top universities. Since I had most of the data, I thought it would be interesting to see what LMS (learning management system) the top universities used. Also, I wanted to know if funding had a correlation with their selection. (This idea came from comments posted by Patrick Masson and George Kroner on the e-Literate site.) The 4 sections of the graphs below: Not surprisingly, Blackboard and Moodle are the two most selected LMS. In absolute numbers, they are: Blackboard 77, Moodle 55, Sakai 24, Desire2Learn 13 and Claroline 9. If you look at the LISTedTECH column which contains the ranking based on the average of all 8 world rankings, you can see that the 2 top LMS are Sakai and Desire2Learn. Based on the differences between the 8 world rankings from 2012 and 2013, I have indicated which LMS universities are rising or falling in the rankings. Moodle, Blackboard and Sakai have universities on the rise. You can see that Sakai followed by Blackboard are selected by very well funded universities.

Anthology and Blackboard to Merge Into a Massive New Company

On September 13th, Anthology and Blackboard announced they will merge by the end of 2021. This transaction will “create the most comprehensive EdTech ecosystem across academic, administrative and student engagement applications”, mentioned the joint press release. This mega-company will serve more than 150 million users spread over 4,000 campuses in 90+ countries.  A long-time learning END_OF_DOCUMENT_TOKEN_TO_BE_REPLACED  Read More

This Week In Review – September 14th to September 20th

Merger Anthology and Blackboard Merging to Create Massive Ed Tech Ecosystem Anthology and Blackboard are merging into a yet unnamed company that shall offer a broad edtech ecosystem from enrollment management and alumni fundraising to communication tools and student success solutions. Led by Jim Milton, this new company “[…]will have a data-driven product portfolio that END_OF_DOCUMENT_TOKEN_TO_BE_REPLACED  Read More