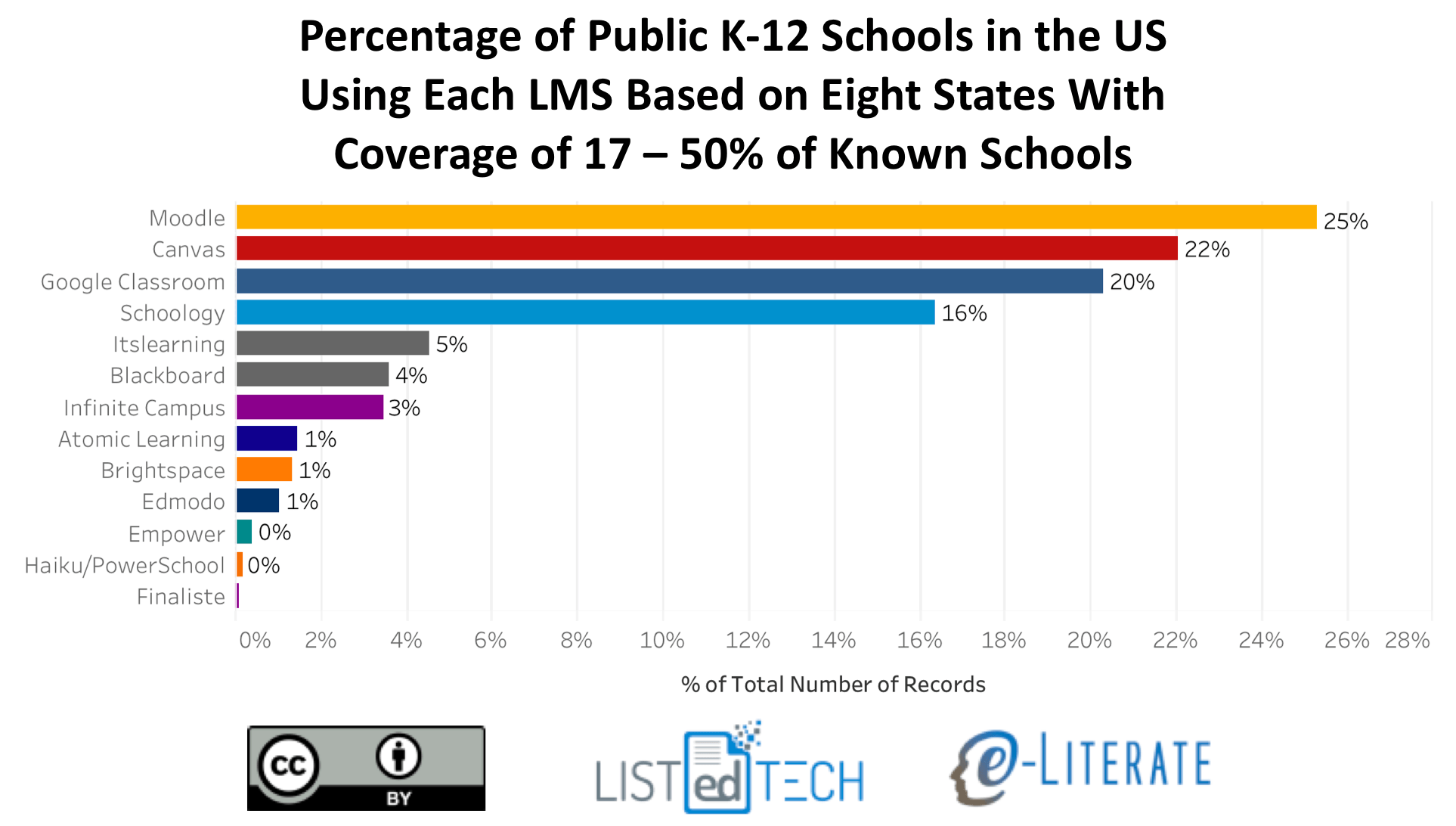 Article is by Phil Hill and Cross-posted at e-Literate Over the past several months, we have worked with our partners at eLiterate as we have ramped up our efforts to collect data on LMS usage in the K-12 market in the United States. This is a massive effort as the market includes more than 130,000 individual public and private schools, and more than 13,600 school districts, according to recent NCES documentation. We are aware of several private data sources with estimates on the K-12 LMS market, but there are no public sources.

Part of the challenge is that the K-12 market is messier than higher education’s and its roughly 7,200 institutions. One reason is that the general IT infrastructure in K-12 is less mature than in higher ed, and for smaller schools there are a lot of ad hoc implementations running on a local server not even in a data center. Another reason is the availability of free options such as Google Classroom, or freemium options such as that offered by Schoology and Canvas for individual faculty.

As we build up the data and improve our methods, we believe we are starting to see some interesting trends in the data worth sharing.

Our initial sample looks at 6,875 public schools from across the country in the NCES-designated primary, middle, high and other (special ed, vocational or alternative) categories. These results were analyzed over several data collection methods along with manual evaluation of that data. That said, we expect to see movement in the numbers as we collect and verify additional data, including LMS usage at private schools.

Before we share the preliminary data, some caveats are in order to hopefully avoid anyone misrepresenting this information:

The first graph presents a view of K-12 school-wide LMS implementations in the United States for the 8 states (and DC) where we have at least 17% coverage of known schools (Alaska, Delaware, District of Columbia, Florida, Massachusetts, Minnesota, Texas, Wisconsin).

To get a sense of how representative this initial market share is, we made the same calculations across all 6,875 schools from 50 states and DC that in our data thus far. The data for each LMS matched within ~2% for each LMS (e.g. Canvas went from 22% to 24%, Moodle went from 25% to 24%) between the two views.

The general distribution is somewhat consistent across school levels – primary, middle, high school, and others – with some interesting smaller variations. The following view also gives a sense of our relative data coverage by level. In this case we are using all our data across the 6,875 schools. Note that totals are higher than this number due to multiple systems being available at some schools.

We hope this new data provides a broader view of the academic LMS market. We’d love to hear your feedback and questions.

The Online Program Management (OPM) product category has changed in the past few years. Contrary to most product groups, the OPM market is now dominated by smaller players, grouped in the ‘Others’ in our graph jargon. Where are the previous leaders? Has the pandemic altered this category? Dr. Carl Sagan once said: “You have to END_OF_DOCUMENT_TOKEN_TO_BE_REPLACED  Read More

For the past couple of years, we have been tracking RFP data to help us better understand future trends in system implementations. Because of the nature of a request for proposals, this data also gives us an additional indicator of which institutions might change their systems, which is our core business. Since the first iteration END_OF_DOCUMENT_TOKEN_TO_BE_REPLACED  Read More

Community colleges are often an afterthought in the HigherEd world. Yet, in the United States, there are almost 1,500 institutions, and in Canada, a little over 200. These community colleges north of the 28th parallel register more than 5.5 million students. It is time to specifically showcase community colleges in a post. Today, we want END_OF_DOCUMENT_TOKEN_TO_BE_REPLACED  Read More