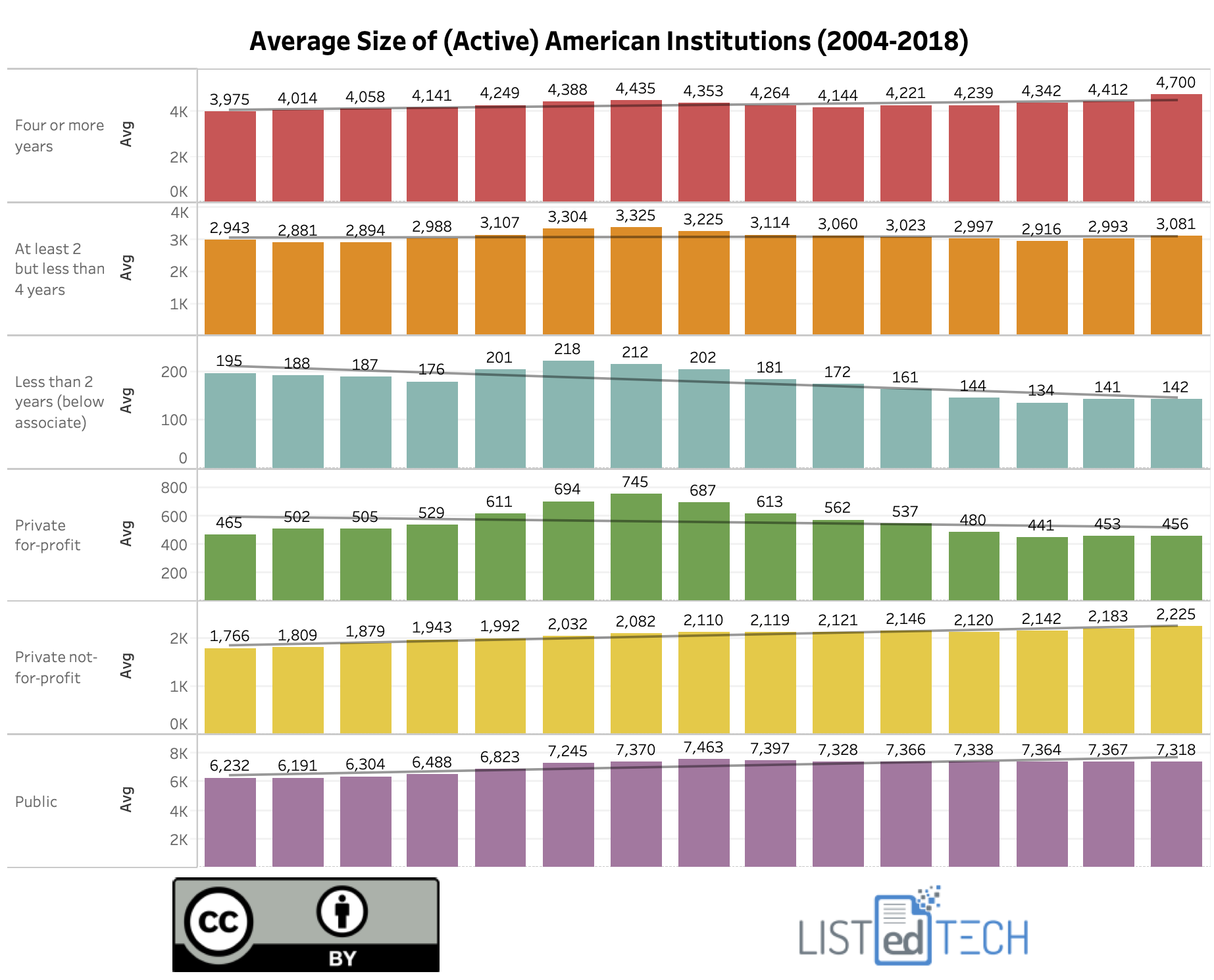 When we reposted Phil Hill’s blog post on school closures in April 2019, we received a comment from Andres Fortino, Principal at Fortino Global Education and Adjunct Faculty Member at NYU School of Professional Studies, who suggested taking in consideration the actual enrollment versus the number of institutions impacted by school closures: “I think you are looking at the wrong numbers. Please rework based not on number of institutions but on number of students affected. Enrollment would tell a different story.”

We finally got time to look at this data again and we put the student enrollment side-by-side with the number of institutions. In order to do this, we extracted the IPEDS’ data for each year making sure that the data collection year matched the requested enrollment year. This created 15 separate files that I merged into one.

The other segments saw more school closures than school creations since 2011 (for 2-4 year colleges) and since 2015 for “less than 2 year” colleges. Although the latter category sees a slight decline in student enrollment, the 2-4 year college category has declined significantly since 2010 with a net loss of 2M students.

When we look at the fourth graph, we see that the average size of American institutions decreases in the private-for-profit and in the less-than-two year institutions. Over the past three to four years, we witnessed several big school closures in these two categories, corroborating the downward spiral we noted since 2010. Overall, though, this tendency of school closures does not affect students as strongly as the net loss of institutions may show. We believe that students pursue their education in another college.

Make sure to read this post from PhilonEdTech, including updated graphics showing US postsecondary institution closures and mergers.

Anthology and Blackboard to Merge Into a Massive New Company

On September 13th, Anthology and Blackboard announced they will merge by the end of 2021. This transaction will “create the most comprehensive EdTech ecosystem across academic, administrative and student engagement applications”, mentioned the joint press release. This mega-company will serve more than 150 million users spread over 4,000 campuses in 90+ countries.  A long-time learning END_OF_DOCUMENT_TOKEN_TO_BE_REPLACED  Read More

This Week In Review – September 14th to September 20th

Merger Anthology and Blackboard Merging to Create Massive Ed Tech Ecosystem Anthology and Blackboard are merging into a yet unnamed company that shall offer a broad edtech ecosystem from enrollment management and alumni fundraising to communication tools and student success solutions. Led by Jim Milton, this new company “[…]will have a data-driven product portfolio that END_OF_DOCUMENT_TOKEN_TO_BE_REPLACED  Read More