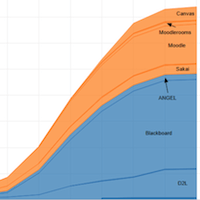 Ten years ago, in October 2005, Blackboard announced the purchase of WebCT for $180M USD ($218M in current USD). This announcement caused ripples in higher education. It was the second biggest merger to be announced in as many weeks. The first such purchase was of PeopleSoft by Oracle.

The merger of the two biggest LMS companies was received with mixed emotions to say the least. Blackboard published the following client commitment on its website:

“the two companies would seek to retain 100 percent of their clients”, “develop, innovate, upgrade, improve and support both Blackboard’s and WebCT’s products,” and “over time,” develop a new product incorporating the best of both companies’ work.” Inside Higher Ed

As soon as the purchase was announced, WebCT customers felt a general apprehension towards the future of their system. Many of the institutions that were in the process of getting a new LMS were forced to reevaluate their vision.

Many wondered how long it would be before WebCT’s products were phased out entirely. This phasing out eventually happened when Blackboard announced, in 2009, that it would stop supporting WebCT in 2011 and the Vista line by 2013.

LISTedTECH – We can help you make sense of the Elephant in the room. If you need data, look at our personalized dataset page

So what happened? What LMS did HigherEd institutions select?

By using the data in the LISTedTECH wiki, we selected the learning management systems (LMS) that were used right after WebCT. The visualization below shows what 740 HigherEd institutions selected to replace WebCT. As you can see, the majority moved away from Blackboard LMS. The WebCT users selected the following LMS:

An interesting part of this story is the impact that the purchase of WebCT had on the customers mindset. After it was announced that Blackboard was purchasing WebCT, and especially when it was announced that they would no longer be supporting WebCT, several clients felt they were losing control. They were being imposed a system. To regain control, several moved to an open source system.

In 2006, the open source movement had a 7% (data source Phil Hill’s graph) share of the market. This market share was growing at a slow pace. Clearly, by this time, Moodle and Sakai had better versions of their system, but to a certain degree, Blackboard helped them get more clients. They created a need, and an option, that might not have looked so appealing for many if not for the small push that Blackboard gave them. As you can see on the graph below, the open source movement got about 35% of the WebCT clients.

What does the Open source LMS market look like today?

The current LMS HigherEd open source market share of North America is 39%. This figure is built upon the over 4,000 HigherEd institutions in North America for which we have LMS data. Based on the number of institutions, Moodle is still the biggest open source system. Sakai’s growth looks to be at a standstill and the new kid on the block, Canvas, is the fastest growing LMS in both the open source and propriety market.

The open source LMS needs to thank Blackboard for part of their success!

The Online Program Management (OPM) product category has changed in the past few years. Contrary to most product groups, the OPM market is now dominated by smaller players, grouped in the ‘Others’ in our graph jargon. Where are the previous leaders? Has the pandemic altered this category? Dr. Carl Sagan once said: “You have to END_OF_DOCUMENT_TOKEN_TO_BE_REPLACED  Read More

For the past couple of years, we have been tracking RFP data to help us better understand future trends in system implementations. Because of the nature of a request for proposals, this data also gives us an additional indicator of which institutions might change their systems, which is our core business. Since the first iteration END_OF_DOCUMENT_TOKEN_TO_BE_REPLACED  Read More

Community colleges are often an afterthought in the HigherEd world. Yet, in the United States, there are almost 1,500 institutions, and in Canada, a little over 200. These community colleges north of the 28th parallel register more than 5.5 million students. It is time to specifically showcase community colleges in a post. Today, we want END_OF_DOCUMENT_TOKEN_TO_BE_REPLACED  Read More