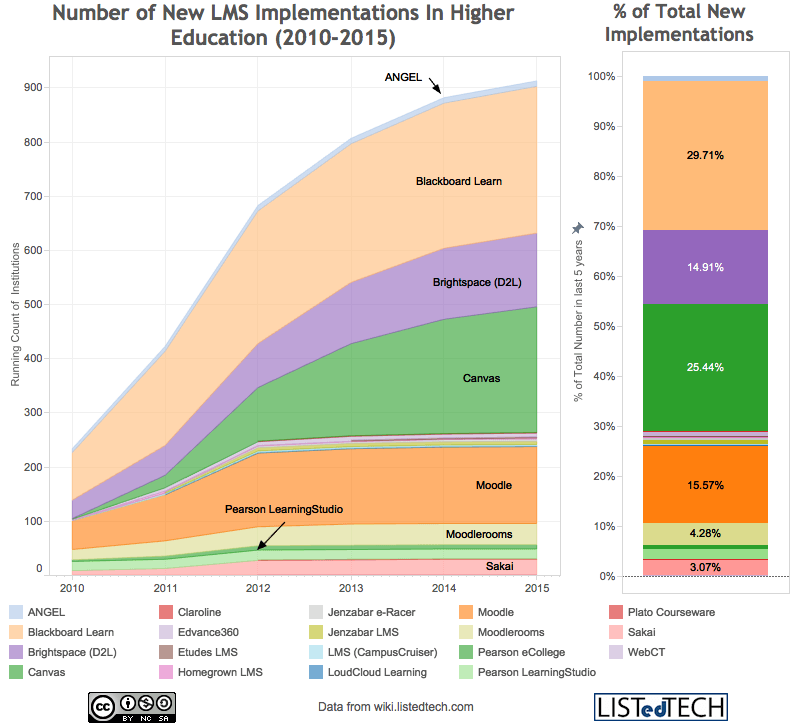 The Higher Education market share for Learning Management Systems (LMS) has been looked at and tracked for as long as they have been used in colleges and universities. For years, The Campus Computing Project has been the reference used to get better insight on the LMS usage in HigherEd. This information is based on surveys of institutions (the 2014 edition is based on 470 responses). In the last 5 years or so, Phil Hill’s one pager of the HigherEd market share has probably been the most cited graphic on the subject. Edutechnica is another website that has given us LMS stats. Its information is collected by automated scraping of websites. The graphic below is based on 3,965 higher education institutions contained in the LISTedTECH wiki. The data only reflects the main LMS used at colleges and universities.

These historical trends have usually been tracked using year over year percentage of total usage. This is great, but it’s harder to see micro trends or actual changes in the market since some of the data gets canceled out. An example of this would be:

What LMS was selected?

Another way of looking at LMS trends would be to look at the new systems that have been implemented in the last few years. This would show us what LMS colleges and universities are currently selecting. To do this, we looked at 912 LMS implementations from 2010 to 2015. This excludes renewal or system upgrades and only looks at colleges and universities that have changed system in the last 5 years.

What LMS did colleges and universities stop using?

As you can see, WebCT has been the most decommissioned system in the last 5 years and this can be explained by the termination of the support for that product by Blackboard (more info on the post I wrote). The other LMS that are being decommissioned are Learn, ANGEL, Academic Suite and Courseinfo. We need to be careful when we interpret this data. It’s not that HigherEd is running away from Blackboard but rather that they are forced into looking for a new system since WebCT and ANGEL (about 65% of the decommissioned LMS) are being discontinued.

In order for a LMS to maintain its market share, it needs to have the same percentage of new implementations. By comparing new LMS implementations (912 in last 5 years) and total LMS market share (3,965 in 2015) side by side, we can see a few interesting trends.

What are your thoughts on this? Should we look at the data in another light?

The Online Program Management (OPM) product category has changed in the past few years. Contrary to most product groups, the OPM market is now dominated by smaller players, grouped in the ‘Others’ in our graph jargon. Where are the previous leaders? Has the pandemic altered this category? Dr. Carl Sagan once said: “You have to END_OF_DOCUMENT_TOKEN_TO_BE_REPLACED  Read More

For the past couple of years, we have been tracking RFP data to help us better understand future trends in system implementations. Because of the nature of a request for proposals, this data also gives us an additional indicator of which institutions might change their systems, which is our core business. Since the first iteration END_OF_DOCUMENT_TOKEN_TO_BE_REPLACED  Read More

Community colleges are often an afterthought in the HigherEd world. Yet, in the United States, there are almost 1,500 institutions, and in Canada, a little over 200. These community colleges north of the 28th parallel register more than 5.5 million students. It is time to specifically showcase community colleges in a post. Today, we want END_OF_DOCUMENT_TOKEN_TO_BE_REPLACED  Read More