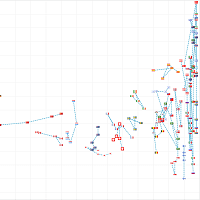 One of the great things about this site is all the complimentary data we receive. One of these datasets is the 8 world rankings that we compile yearly. In the past we have played with this data to show 9 World University rankings – Side by side – part 1 and make a Historical compilation of 7 world universities rankings: huge drop for US, rise for French. What got me started on the following visualization is an article by Alex Usher titled: Times Higher Rankings, Weak Methodologies, and the Vastly Overblown “Rise of Asia”. His article explains how universities are “slow moving creatures” and if major jumps (in the rankings) happen from year to year, it usually is an indication that the rankings have poor methodology. Therefore, to see if there truly is a rise with the Asian universities, we have combined several world rankings.

Below, you can see two visualizations: the first is a grouping by geographical regions; the second by individual countries. Both are controlled by numerous criteria, located in the center and on the right side. Each filter affects both visualizations. To better understand how the vizes work, let’s use the Asia example: deselect all but Asia in the regions and it will reveal the 4 countries (China, Japan, Russia and South Korea) that make up the grouping. In both visualizations, the goal for the region is to be closer to the bottom left corner (more institutions and better rankings). Some observations based on the default view

The default visualization shows a compilation of 5 world rankings (Academic Ranking of World Universities, Performance Ranking of Scientific Papers for World Universities, SCImaga Institutions Rankings, Times Higher Education World Rankings and Webometrics Ranking of World Universities) for the top 200 institutions in each ranking. The scatter plots illustrate how the groupings moved in the last 5 years. Why did I only take those 5 rankings? The answer is simple, I don’t have the data for the other years. As you can see in the table below, some of the rankings didn’t start before 2010 etc. You will also notice that some years don’t have exactly 200 institutions. This is caused by the ties.

The Online Program Management (OPM) product category has changed in the past few years. Contrary to most product groups, the OPM market is now dominated by smaller players, grouped in the ‘Others’ in our graph jargon. Where are the previous leaders? Has the pandemic altered this category? Dr. Carl Sagan once said: “You have to END_OF_DOCUMENT_TOKEN_TO_BE_REPLACED  Read More

For the past couple of years, we have been tracking RFP data to help us better understand future trends in system implementations. Because of the nature of a request for proposals, this data also gives us an additional indicator of which institutions might change their systems, which is our core business. Since the first iteration END_OF_DOCUMENT_TOKEN_TO_BE_REPLACED  Read More

Community colleges are often an afterthought in the HigherEd world. Yet, in the United States, there are almost 1,500 institutions, and in Canada, a little over 200. These community colleges north of the 28th parallel register more than 5.5 million students. It is time to specifically showcase community colleges in a post. Today, we want END_OF_DOCUMENT_TOKEN_TO_BE_REPLACED  Read More