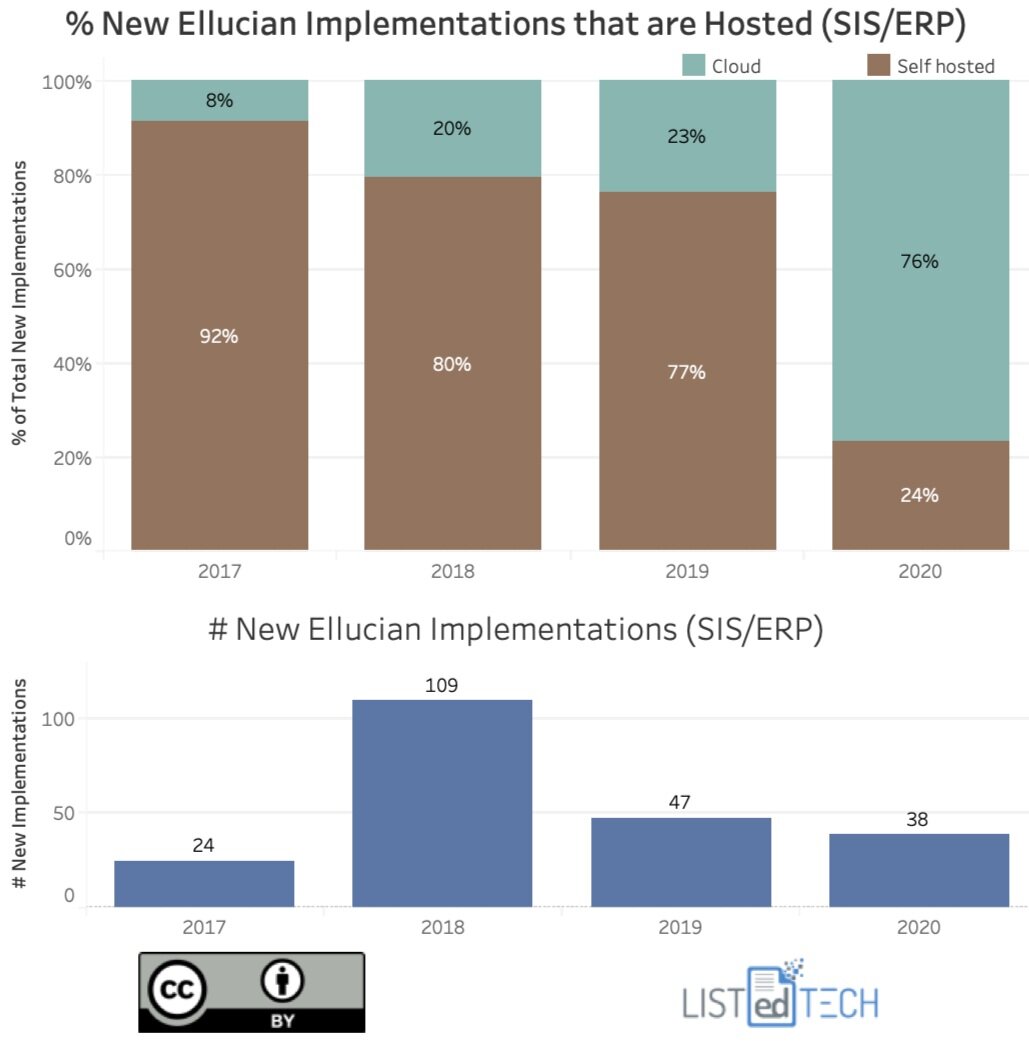 Ellucian had their yearly conference Ellucian live 2021 last week. During the event, we saw several announcements about their cloud implementations. At LISTedTECH, we like to use this type of affirmations to help validate our data. We decided to use this occasion to share it.

As a general rule, we are able to gather 80% of the data over the years. The missing 20% is often behind firewalls, in portals or just not public. This is reflected when we compare actual numbers as you will see below.

In a press release during the event, Elucian announced that “two-thirds of Ellucian customers with new implementations moved to the cloud in 2020—which is double the rate of 2019.” To analyze this statistic, we looked at the past four years of implementations for Ellucian.

We can see that Ellucian’s numbers match our numbers. It was also true that cloud implementations doubled between 2017 and 2018, but in terms of absolute numbers, the number of new implementations are slowing down.

In the same press release, Ellucian mentioned that nearly 500 Higher Education institutions have their ERP/SIS Ellucian systems in the cloud. As you can see in the graph below, we believe that their affirmation is true (390 x 20%), but they didn’t mention the 1800 on-premise implementations which still represent the majority of their active implementations.

1100 Ellucian clients are now in the cloud

With these new cloud implementations, more than 1,100 Ellucian clients are now in the cloud. Laura Ipsen, President and CEO of Ellucian states that “[t]he pandemic did not create this need but has been a clear accelerant especially as more than 160 million students moved online globally.”

We will, of course, be able to make a better analysis of this trend once the pandemic is behind us, but we are wondering if cloud implementations will continue in an upward motion or will on-premise implementations make a return?

Also, to properly analyze this trend, we need to look at all systems: not just the ERP/SIS. Since we don’t track cloud implementations for these systems (Financial Aid, Portals, Document Management, Degree Audit, etc.), we are unable to validate these numbers thoroughly.

The Online Program Management (OPM) product category has changed in the past few years. Contrary to most product groups, the OPM market is now dominated by smaller players, grouped in the ‘Others’ in our graph jargon. Where are the previous leaders? Has the pandemic altered this category? Dr. Carl Sagan once said: “You have to END_OF_DOCUMENT_TOKEN_TO_BE_REPLACED  Read More

For the past couple of years, we have been tracking RFP data to help us better understand future trends in system implementations. Because of the nature of a request for proposals, this data also gives us an additional indicator of which institutions might change their systems, which is our core business. Since the first iteration END_OF_DOCUMENT_TOKEN_TO_BE_REPLACED  Read More

Community colleges are often an afterthought in the HigherEd world. Yet, in the United States, there are almost 1,500 institutions, and in Canada, a little over 200. These community colleges north of the 28th parallel register more than 5.5 million students. It is time to specifically showcase community colleges in a post. Today, we want END_OF_DOCUMENT_TOKEN_TO_BE_REPLACED  Read More