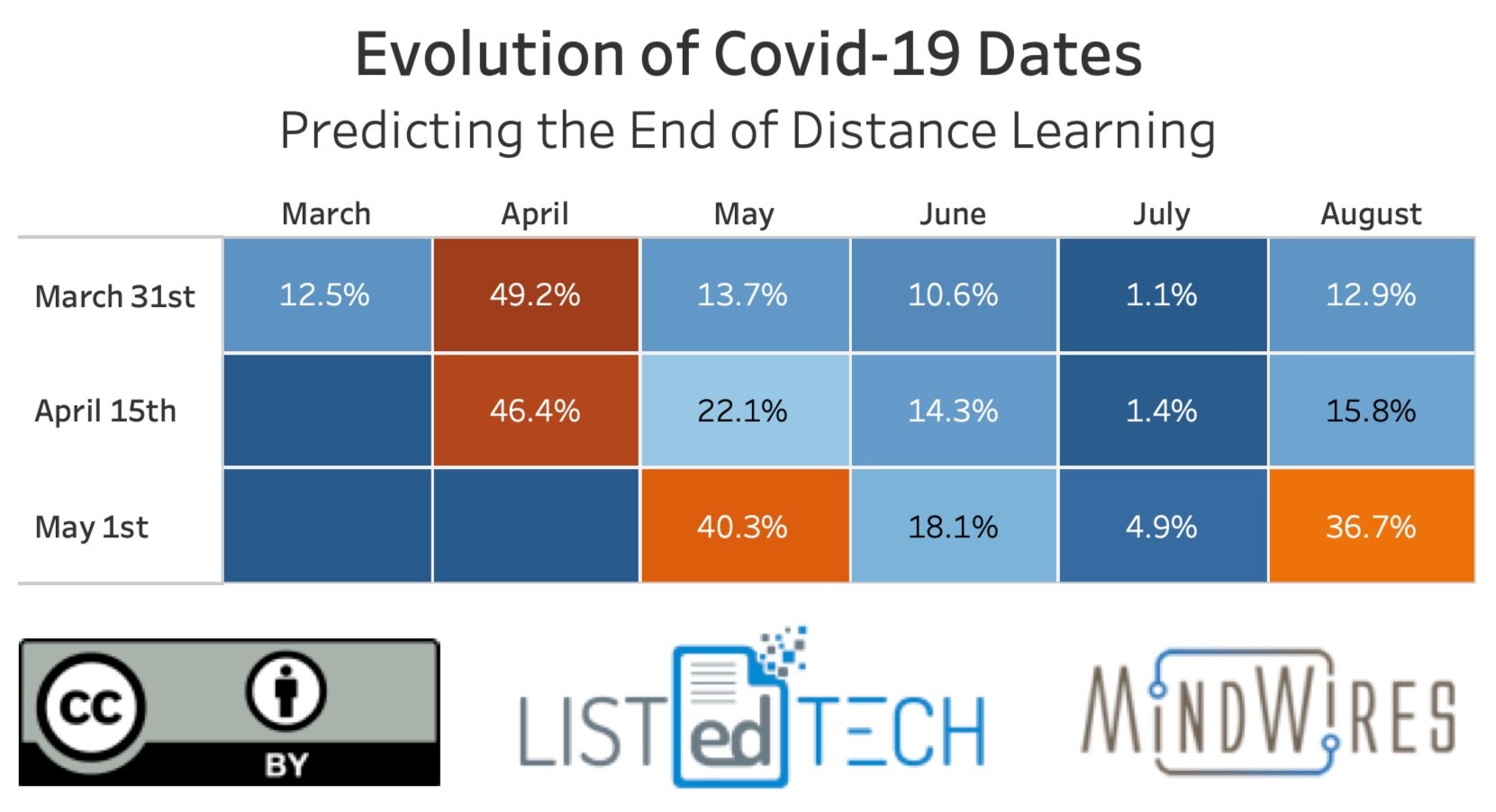 With the month of May comes the start of spring/summer courses and day 50 of our quasi-quarantine in Ottawa. Like many others, we have regularly gone from thinking this will end shortly to looking at a date in a few months’ time thinking “clearly it won’t last until then (then being replaced by summer vacation, Thanksgiving, Christmas, etc.)”.

Educational institutions have had this line of thinking for a few weeks now and we have been tracking the end dates for online/distance learning that they have been predicting since March. It’s interesting to go back and see just how these predictions have changed in such a short time.

Some institutions are using the phrase ‘until further notice’ for back to on-campus, face-to-face meetings, while others keep postponing a definite decision by a few weeks at a time.

For this post, we looked at about 1,000 institutions that had end dates in March or April to see what was now being projected, with snapshots at about 15-day intervals. We see three different scenarios:

ListEdTech is pleased to announce that Eric Stoller is joining the company as our Chief Evangelist. With 20 years of experience in higher education marketing, student success, and edtech, Eric is perfectly suited to help us scale as a leading edtech market research firm.  “Eric’s knowledge and passion of the industry will help us better END_OF_DOCUMENT_TOKEN_TO_BE_REPLACED  Read More

On Friday, June 24th, 2022, several websites specialized in financial news announced a huge acquisition: Zendesk agreed to be acquired by a consortium of private equity firms for an amount between 9.5 and 10.2 billion dollars, depending on the news source. In the education sector, Zendesk is the leader of the help desk product category END_OF_DOCUMENT_TOKEN_TO_BE_REPLACED  Read More

On June 14, 2022, at least three HigherEd-oriented websites (Inside HigherEd; Higher Ed Dive; EdScoop) published articles stating that investments in the SIS product group doubled in 2021. The authors referenced a report by the Tambellini Group. In this post, we want to add some data insights on SIS implementations available in our database. For END_OF_DOCUMENT_TOKEN_TO_BE_REPLACED  Read More