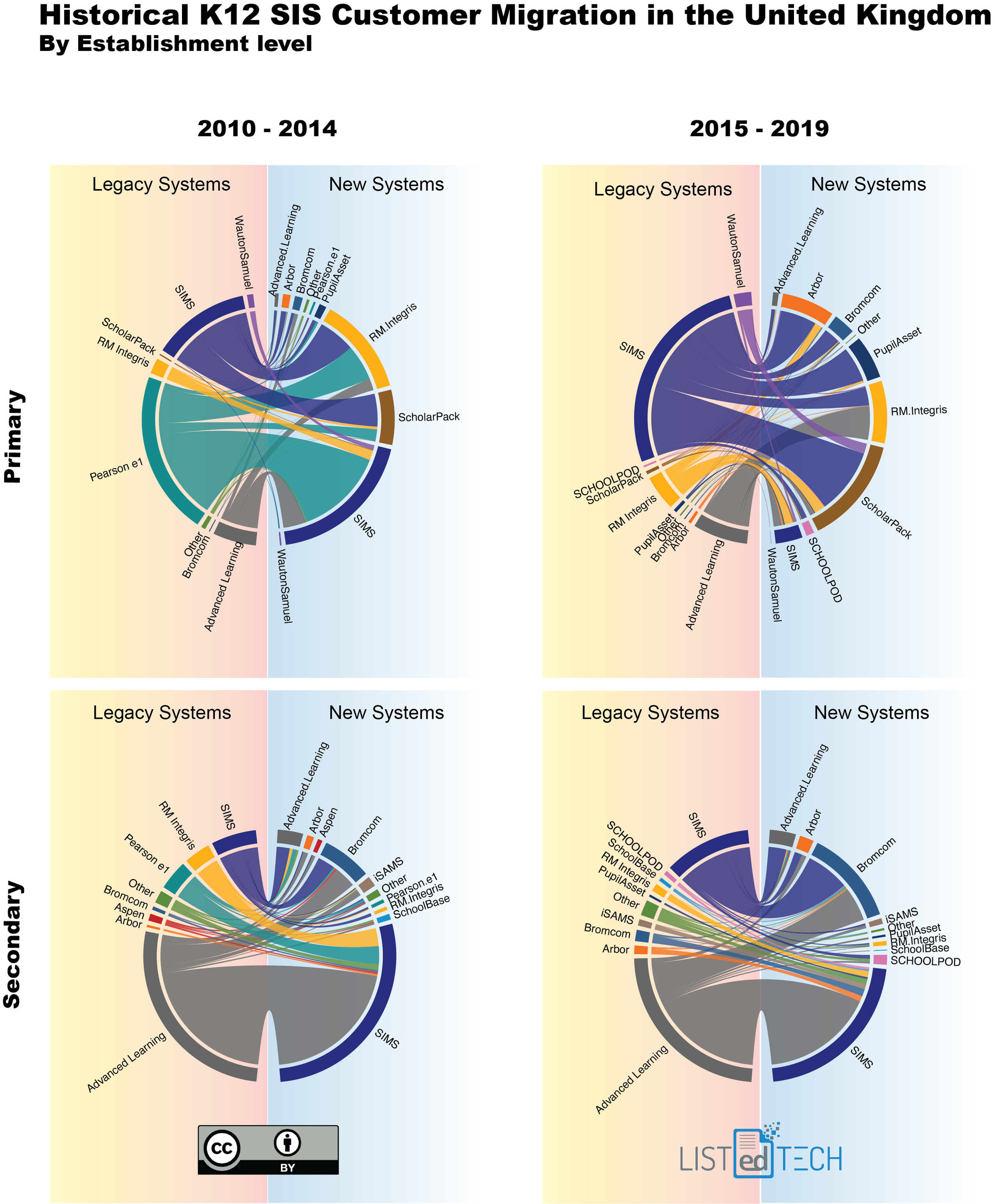 Back in November, I got the chance to meet Joshua Perry, writer of the “Bring more data” blog. Joshua has been following the Management Information System (MIS) used in the UK K12 market. Have a look at some of his posts http://bringmoredata.blogspot.com.

After discussing our mutual interests in educational systems’ market trends, we thought it could be interesting for the two of us to swap data and write a post using the other’s data. So this is my attempt.

I created four historical graphs (2010-2014 to 2015-2019) of primary vs secondary level trends where every line represents a school. The left side shows the previous campus Student Informations System (SIS), measured by the number of institutions, and the right side shows the new SIS.

Another interesting tidbit is that the systems used in the UK are completely different – as in I don’t recognize a single system used in the UK that would be used in North America.

A PDF version is available to help you zoom into the graphs.

For any questions about the data used for the graphs in this post, please contact Joshua Perry, writer of the “Bring more data”.

ListEdTech is pleased to announce that Eric Stoller is joining the company as our Chief Evangelist. With 20 years of experience in higher education marketing, student success, and edtech, Eric is perfectly suited to help us scale as a leading edtech market research firm.  “Eric’s knowledge and passion of the industry will help us better END_OF_DOCUMENT_TOKEN_TO_BE_REPLACED  Read More

On Friday, June 24th, 2022, several websites specialized in financial news announced a huge acquisition: Zendesk agreed to be acquired by a consortium of private equity firms for an amount between 9.5 and 10.2 billion dollars, depending on the news source. In the education sector, Zendesk is the leader of the help desk product category END_OF_DOCUMENT_TOKEN_TO_BE_REPLACED  Read More

On June 14, 2022, at least three HigherEd-oriented websites (Inside HigherEd; Higher Ed Dive; EdScoop) published articles stating that investments in the SIS product group doubled in 2021. The authors referenced a report by the Tambellini Group. In this post, we want to add some data insights on SIS implementations available in our database. For END_OF_DOCUMENT_TOKEN_TO_BE_REPLACED  Read More