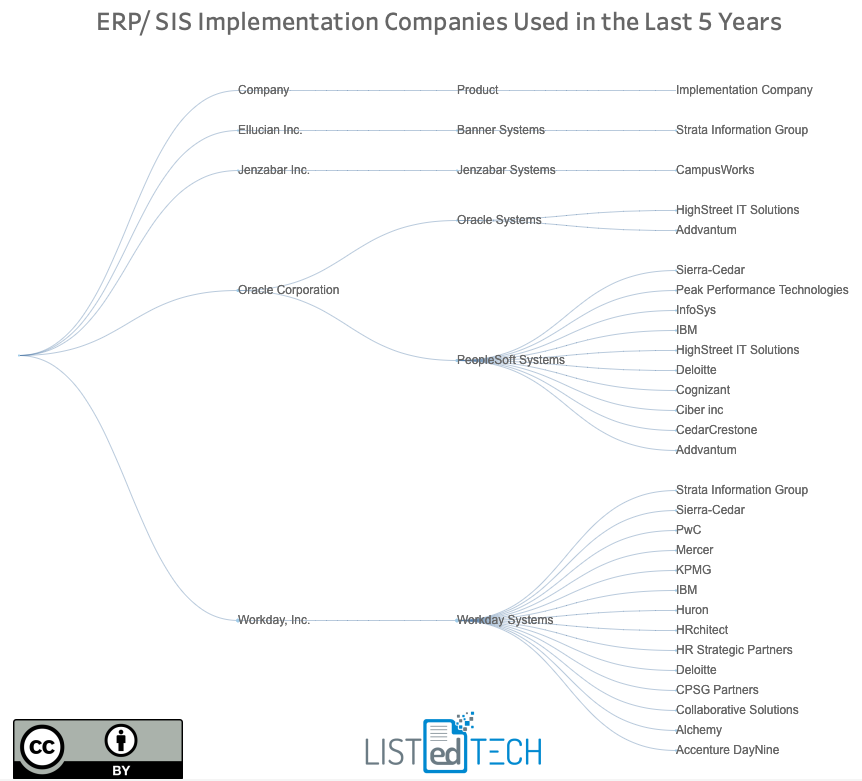 About a year and a half ago, we did our first post on the Implementation companies that are often used to help implement new ERP/SIS systems. At the time, we had data for about 400 implementations within the last 10 years. This new post will look at just over 300 implementations in the last 5 years. It’s a more restrictive look at what is happening in the short term.

Not all higher education institutions use implementation partners. Many have their own implementation teams. For the purpose of this post, we will define implementation companies as a company that helps implement a new system. So, this will exclude system upgrades and system add-ons.

The first graph illustrates the companies we found that have implemented systems in the last 5 years.

The table below shows the same data but has a size component to it. The size refers to the number of implementations done within the last five years. The companies with the most implementations are Alchemy, Ciber, IBM, and Sierra-Cedar.

The Online Program Management (OPM) product category has changed in the past few years. Contrary to most product groups, the OPM market is now dominated by smaller players, grouped in the ‘Others’ in our graph jargon. Where are the previous leaders? Has the pandemic altered this category? Dr. Carl Sagan once said: “You have to END_OF_DOCUMENT_TOKEN_TO_BE_REPLACED  Read More

For the past couple of years, we have been tracking RFP data to help us better understand future trends in system implementations. Because of the nature of a request for proposals, this data also gives us an additional indicator of which institutions might change their systems, which is our core business. Since the first iteration END_OF_DOCUMENT_TOKEN_TO_BE_REPLACED  Read More

Community colleges are often an afterthought in the HigherEd world. Yet, in the United States, there are almost 1,500 institutions, and in Canada, a little over 200. These community colleges north of the 28th parallel register more than 5.5 million students. It is time to specifically showcase community colleges in a post. Today, we want END_OF_DOCUMENT_TOKEN_TO_BE_REPLACED  Read More