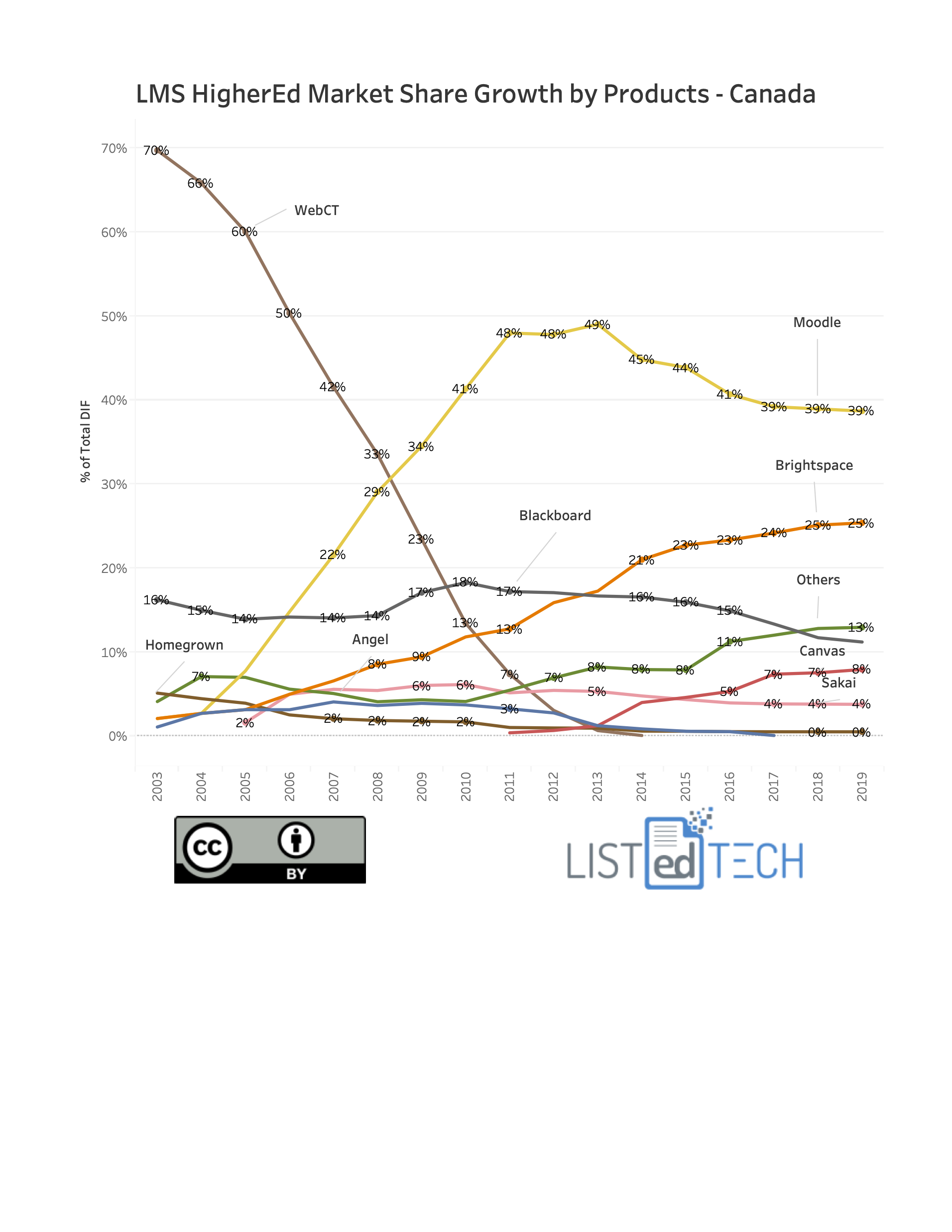 With Canada Day this week, we are updating a 2015 post on Canada’s LMS Systems. Since our last post we have added lots of new institutions and historical data.

Canada has a long history with learning management systems. As you might already know, WebCT was originally developed at the University of British Columbia by a faculty member in computer science, Murray Goldberg. Another Canadian eLearning company, Desire2Learn, was founded by John Baker in 1999 after identifying his own unfulfilled need for learning online while studying Systems Design Engineering at the University of Waterloo. However, this post is not about Canadian companies, but rather the LMS that are used by Canadian colleges and universities.

A brief history of the Learning Management System in Canada

Once WebCT was introduced in early 1996, Canadian HigherEd institutions selected it as the de facto system to be used. As you can see in the first graph below, almost 70% of Canadian colleges and universities were using WebCT right before it was purchased by Blackboard at the end of 2005. At that time, Blackboard had just under 20% of the LMS market share and Moodle was just starting (5%).

Following the WebCT purchase, institutions migrated to Moodle and, to a lesser degree, to Brightspace (D2L). Blackboard was not very successful in retaining its new (purchased) customers. Since 2003, Blackboard’s Canadian market share stayed mostly flat. We do see a slight rise from 2008 to 2010 caused in part by the phasing out of the WebCT product line. But Blackboard’s market share never rose above 20% even after it purchased Angel (a small player in Canadian HigherEd).

The Canadian migration to the open-source system Moodle was in part out of frustration of being imposed the change. Blackboard was seen as the big bad company and the majority of our (mostly left of the political spectrum) professors did not want to give in.

A few other observations:

Contrary to the US market share that is dominated by Canvas and Blackboard, Canada has a strong preference for Moodle and Brightspace. Moodle’s large market share is in part because of the CEGEP system (50 or so institutions) that has selected to use Moodle as its default system.

Like the US market, however, the Canadian Blackboard and Moodle shares keep falling.

Notes on the data:

ListEdTech is pleased to announce that Eric Stoller is joining the company as our Chief Evangelist. With 20 years of experience in higher education marketing, student success, and edtech, Eric is perfectly suited to help us scale as a leading edtech market research firm.  “Eric’s knowledge and passion of the industry will help us better END_OF_DOCUMENT_TOKEN_TO_BE_REPLACED  Read More

On Friday, June 24th, 2022, several websites specialized in financial news announced a huge acquisition: Zendesk agreed to be acquired by a consortium of private equity firms for an amount between 9.5 and 10.2 billion dollars, depending on the news source. In the education sector, Zendesk is the leader of the help desk product category END_OF_DOCUMENT_TOKEN_TO_BE_REPLACED  Read More

On June 14, 2022, at least three HigherEd-oriented websites (Inside HigherEd; Higher Ed Dive; EdScoop) published articles stating that investments in the SIS product group doubled in 2021. The authors referenced a report by the Tambellini Group. In this post, we want to add some data insights on SIS implementations available in our database. For END_OF_DOCUMENT_TOKEN_TO_BE_REPLACED  Read More