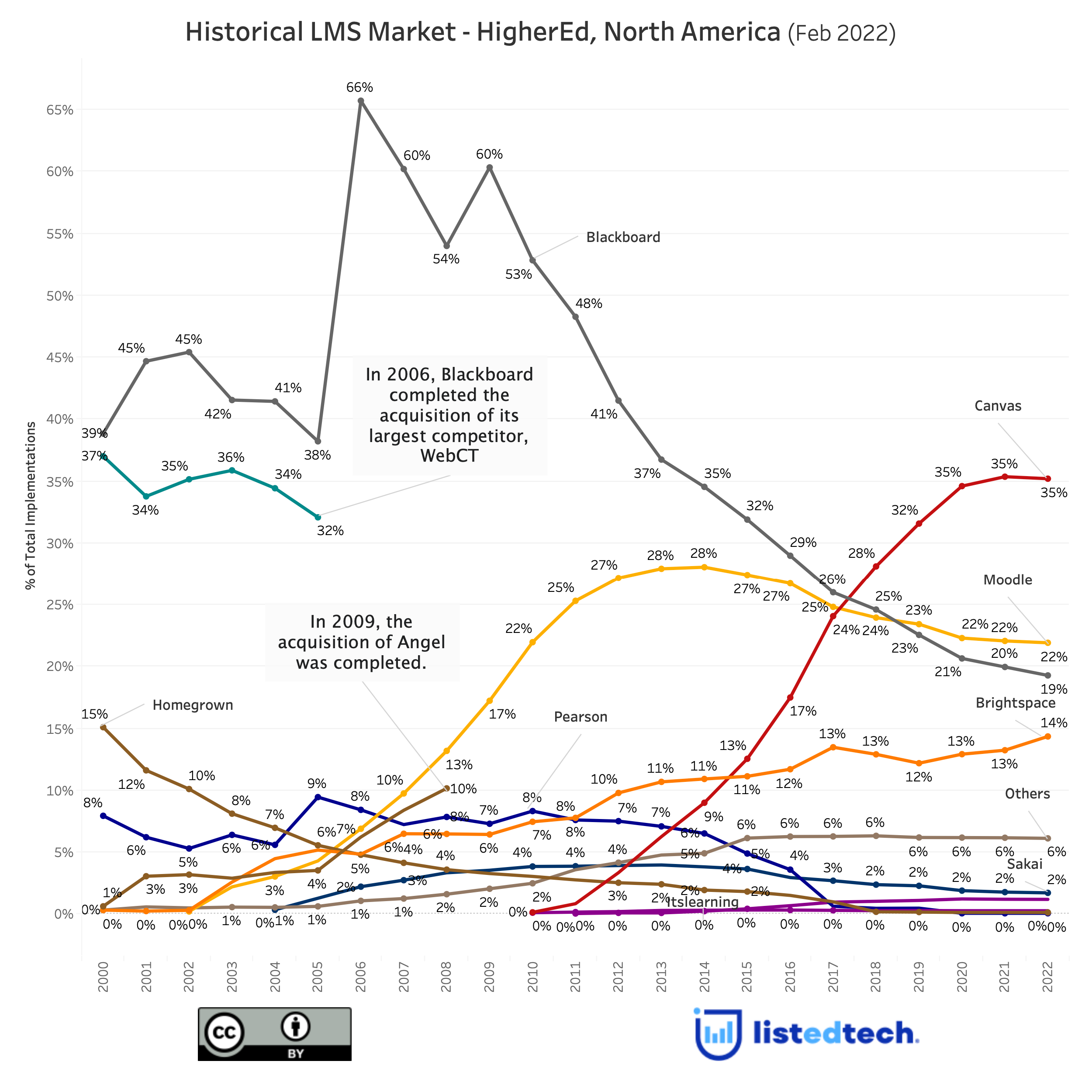 It’s time for another company profile. For this post, we want to paint the picture of one of the first LMS companies: Blackboard. Once the leading company in this product category, Blackboard diversified its corporate assets to curb the decline of revenues and to explore new business opportunities.

To understand how Blackboard started, we need to look at two companies: Blackboard itself and CourseInfo. The idea behind CourseInfo was to offer an interactive learning network to help teachers and professors adapt to the new reality of teaching at the time of the Internet. Within a few years, the company built a portfolio of 15 institutional clients including Cornell University, University of Pittsburgh and Yale Medical School.

In 1997, Michael Chasen and Matthew Pittinsky founded Blackboard with an innovative approach in mind: proposing an online learning solution and thinking through online learning standardization. About a year later, Chasen met with Stephen Gilfus, one of CourseInfo’s co-founders, and together they decided to join forces to form an improved version of Blackboard to attract new capital and scale the business.

By 2006, after the merger with WebCT, the platform was used in more than 65% of U.S. college campuses. In order to be implemented in many institutions across the United States, the company went through an important expansion funded through venture capital from a number of investors. At this time the company renamed its course management system to a new category: the “Learning Management Systems”.

Overseas expansion began in the early 2000s, growing to include Asia, Australia and Europe. In June 2004, Blackboard went public under the stock market ticker BBBB.

Blackboard has acquired other companies to limit competition and expand into new business markets. The firm purchased Prometheus, a solution built by George Washington University, in 2002. Blackboard then acquired its main competitor, WebCT, in 2006, increasing its share of the higher education industry to between 65 and 75 percent. Over the years, Blackboard Xythos, Blackboard Connect, Blackboard Mobile, Blackboard Collaborate, and Blackboard Analytics were among the new products and acquisitions. In 2009, the purchase of ANGEL Learning increased Blackboard’s client base to nearly 6,000. The corporation invested massively (more than $500 million) on acquisitions between 2006 and 2012.

Between 2012 and 2016, the LMS company has also made acquisitions in other product categories such as collaboration tools, help desk, payment solutions, alert notifications, online program management, video conferencing, and business analytics. Blackboard’s acquisitions were not limited to the North American market; they also included enterprises from other continents. Outside of the United States, Moodlerooms Inc. and NetSpot are probably the most well-known purchased enterprises. These two companies became the basis of Blackboard’s Open Source Services division.

Even though most of the business done by Blackboard is in the U.S., it has been dominant on a global scale during the Moodlerooms years.

Coming Back to its Core Business

After the difficult passage through the loss of Moodle certification in 2018 that led to the sale of Moodlerooms, Blackboard was in financial difficulties and tried to improve its situation. In order to remain closer to its mission of providing education services to institutions, the company sold Transact to focus on learning solutions.

Despite having bought several LMS competitors, Blackboard struggled with maintaining its clients. At the time of the Transact’s sale, Blackboard was in high debt, an estimated USD 1.3 billion, based on e-Literate article. By selling Transact, they could cut this debt by half while “remain laser-focused on and continue to deliver market-leading innovation in its teaching and learning portfolio of solutions” as mentioned in the press release at the time. This transaction also helped Blackboard cut on massive expenses (office space, employees and R&D).

Anthology: A Brighter Future for Blackboard?

After several years of business difficulties and financial struggles, Blackboard may have found an ally in Anthology. Announced with pride by both companies in September 2021, the acquisition merger “will result in the end of Blackboard as a freestanding company, and could bring the end of its well-known, and sometimes controversial, brand” (Inside HigherEd). We also covered the merger in a separate post.

At ListEdTech, our goal is to help institutions and companies have access to more data to make better decisions. In mid-August of 2022, we made the Portals product category available for HigherEd. Today, we are happy to announce that the K-12 Portal subgroup is now accessible on our portal. Even though we are still working END_OF_DOCUMENT_TOKEN_TO_BE_REPLACED  Read More

It’s been nearly two decades since many of us started using Facebook. Using a social network (or any website) for that amount of time is pretty astonishing. Known collectively as Meta, the world’s most used social network conglomerate now includes Instagram, Messenger, WhatsApp, Facebook, and Workplace. The arc of Facebook’s dominance started off as a END_OF_DOCUMENT_TOKEN_TO_BE_REPLACED  Read More

Are Institutions Buying More From the Same Product Suite?

This post originates from a discussion with a client. He was wondering if an institution tends to select additional products from the same product suite if it were to expand its IT offering. From the data collected at ListEdTech, the answer is that it depends on the product category. For some product groups, we note END_OF_DOCUMENT_TOKEN_TO_BE_REPLACED  Read More