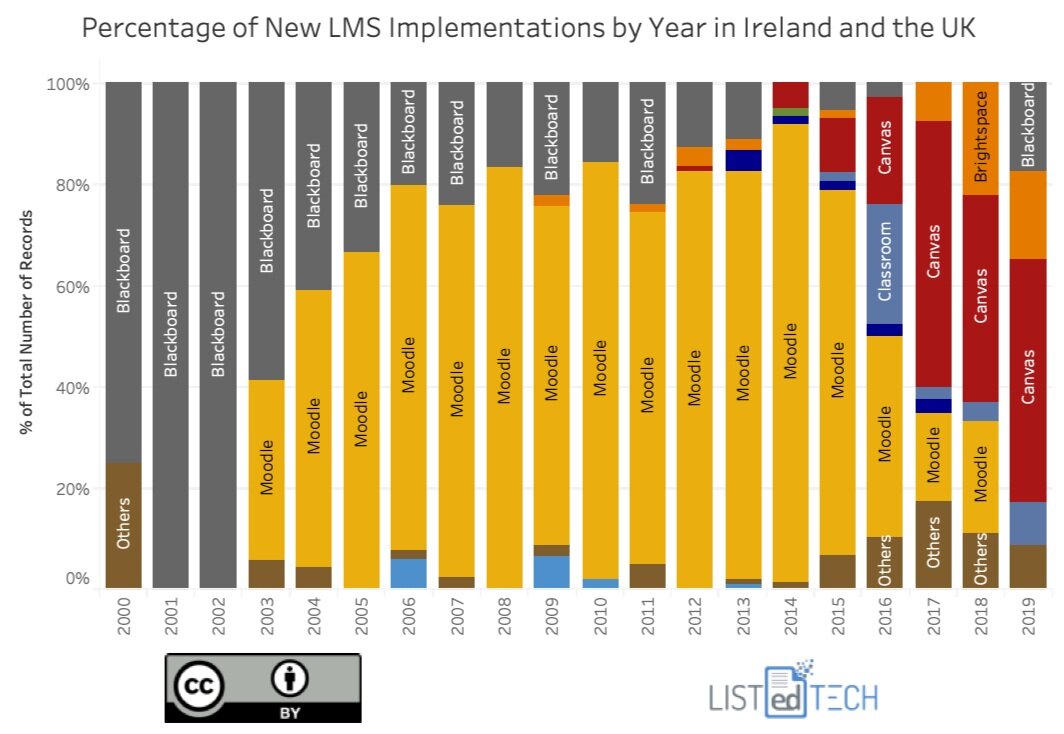 Since the early 2000s, the learning management system market has fast evolved everywhere in the world. When looking at the historical LMS implementations in Canada, we notice that this product category has seen the dominance of a Canadian company (WebCT) for almost the first decade of the century. Despite having several LMS companies from the United Kingdom, the United Kingdom and Ireland did not support one of its own when it came to LMS implementations.

Thanks to the mission of BECTA (British Educational Communications Technology Agency), the United Kingdom has massively invested in technology for its educational sector from 1998 until 2010. These investments are definitely showing in the UK HigherEd LMS Implementations (2000-2019) graph below. We can see that new implementations were abundant, especially in 2006 and 2007.

Are UK and Ireland Moodle fans?

We cannot put the finger on why British and Irish universities have decided to slow its Moodle implementations, but we can make an assumption on why more universities decided to select Canvas. In February 2011, Instructure (owner of Canvas) announced it would make its flagship product freely available as open-source software. As the United Kingdom and Ireland seem to prefer open-source products, universities now had an option. Perhaps, in the article “Open source in higher education: how far have we come?” dating back in 2013, The Guardian underlines the two main reasons why universities select open-source software. The obvious reason is to save money on licence fees each year. Richard Maccabee, then director of the University of London Computer Centre, mentioned that it “can reach six figures over the average contract term of 3 years for a typical university”. The second reason is linked to software and business development. By being part of the maintenance of Moodle’s assessment system, the Open University has been able to influence the development of the learning management system and to make sure the solution includes its own needs.

Active Implementations of LMS in UK and Ireland

Even if new implementations of Moodle have halted for about two years, Moodle is still a strong contender in British universities. With its comeback in 2019 (after two years of no new implementations), Blackboard is in the second position and Canvas is in third. With the actual pace of new implementations for Canvas, we can predict that Instructure will soon be in second place, passing Blackboard. Classroom, ItsLearning and Sakai and all of the other products do not represent a real competition in the British-Irish market.

When we look at the market share of active implementations based on the institution size, we can see that Moodle has its lowest market share in middle-size institutions but Canvas is at its highest.

We have a lot to monitor in the LMS market in the United Kingdom and Ireland:

ListEdTech is pleased to announce that Eric Stoller is joining the company as our Chief Evangelist. With 20 years of experience in higher education marketing, student success, and edtech, Eric is perfectly suited to help us scale as a leading edtech market research firm.  “Eric’s knowledge and passion of the industry will help us better END_OF_DOCUMENT_TOKEN_TO_BE_REPLACED  Read More

On Friday, June 24th, 2022, several websites specialized in financial news announced a huge acquisition: Zendesk agreed to be acquired by a consortium of private equity firms for an amount between 9.5 and 10.2 billion dollars, depending on the news source. In the education sector, Zendesk is the leader of the help desk product category END_OF_DOCUMENT_TOKEN_TO_BE_REPLACED  Read More

On June 14, 2022, at least three HigherEd-oriented websites (Inside HigherEd; Higher Ed Dive; EdScoop) published articles stating that investments in the SIS product group doubled in 2021. The authors referenced a report by the Tambellini Group. In this post, we want to add some data insights on SIS implementations available in our database. For END_OF_DOCUMENT_TOKEN_TO_BE_REPLACED  Read More