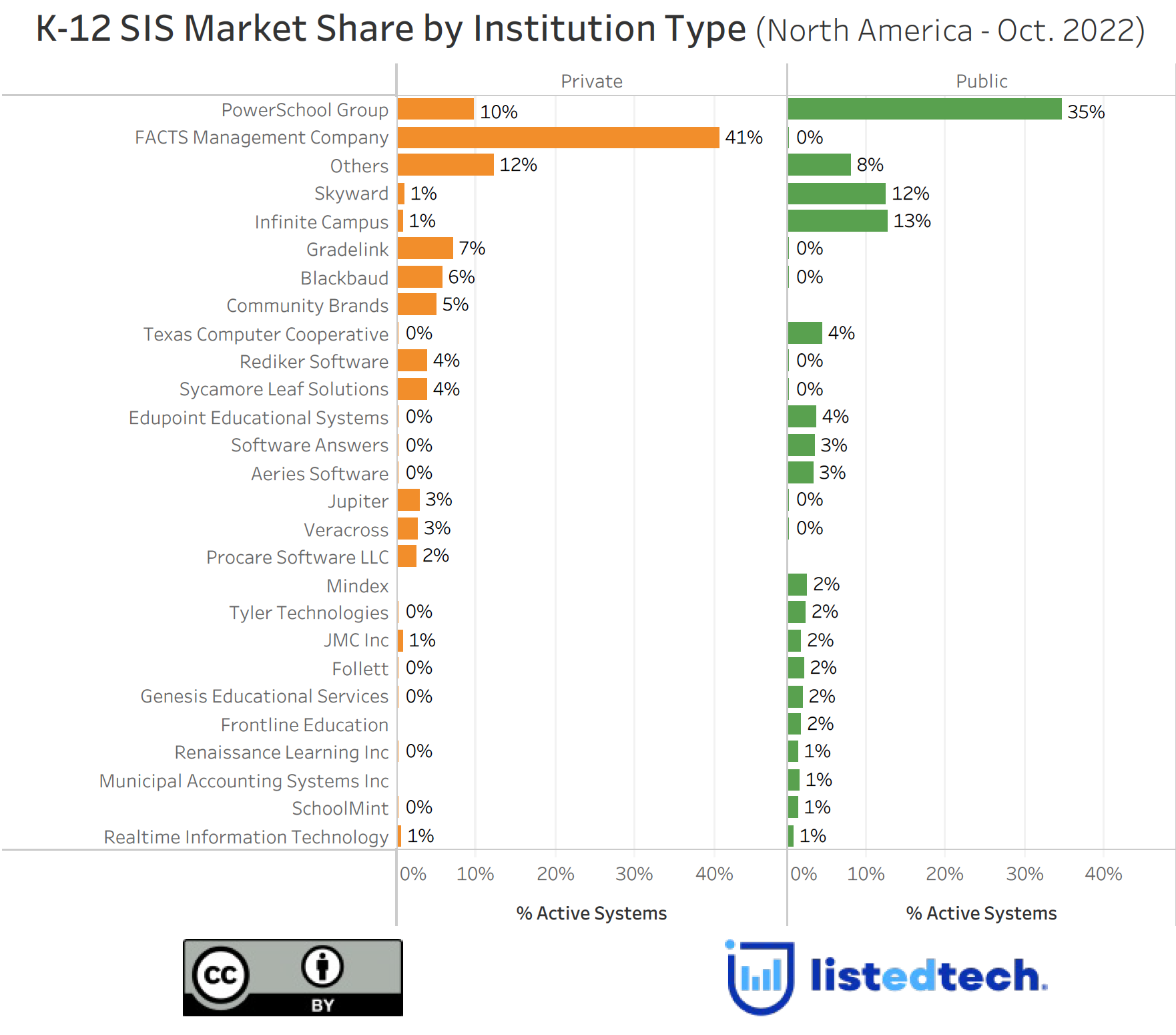 We think it’s time for another update on the student information systems used in the K-12 submarket. We published our initial post on K-12 student information system historical implementations in April 2020 and did an update in July 2021. Let’s dig once again into the SIS used in K-12 to ensure you, subscribers, clients and portal users, have access to the most recent data.

Adding more school districts means having a greater range of SIS solutions. As of July 2021, PowerSchool dominated the product category with 37%, followed by Skyward (14%), and Infinite Campus (13%). This year, we see that the longtail of solutions is even longer. PowerSchool still dominates the K-12 submarket with 28%, but a new player is in the TOP 5: FACTS SIS (10%).

This solution was absent from our radar in the previous versions of the K-12 SIS graph. As mentioned earlier, we explain this situation with the clientele that use FACTS: private school districts. Within this group, institutions choose FACTS SIS over 40% of the time. Please note that we are still adding data daily. Therefore the market share may fluctuate.

The difference in product selection between private and public school districts is astonishing. With the exception of a few products, the only system with a considerable market share that is used in both School Districts types is PowerSchool.

The K-12 SIS market is historically considered a very stable market due to market shares being roughly the same over the years. However, in the past 2-3 years, we noticed a shift in some solutions, as previously mentioned. We will continue to monitor the implemented solutions in public versus private schools as this may be a trend.

Note: We have added a lot of new school districts and SIS implementations to our database. We continue to work towards having the most representative market shares. As of October 2022, we are still missing several thousand school districts, mostly private, with very small enrollment.

The Online Program Management (OPM) product category has changed in the past few years. Contrary to most product groups, the OPM market is now dominated by smaller players, grouped in the ‘Others’ in our graph jargon. Where are the previous leaders? Has the pandemic altered this category? Dr. Carl Sagan once said: “You have to END_OF_DOCUMENT_TOKEN_TO_BE_REPLACED  Read More

For the past couple of years, we have been tracking RFP data to help us better understand future trends in system implementations. Because of the nature of a request for proposals, this data also gives us an additional indicator of which institutions might change their systems, which is our core business. Since the first iteration END_OF_DOCUMENT_TOKEN_TO_BE_REPLACED  Read More

Community colleges are often an afterthought in the HigherEd world. Yet, in the United States, there are almost 1,500 institutions, and in Canada, a little over 200. These community colleges north of the 28th parallel register more than 5.5 million students. It is time to specifically showcase community colleges in a post. Today, we want END_OF_DOCUMENT_TOKEN_TO_BE_REPLACED  Read More