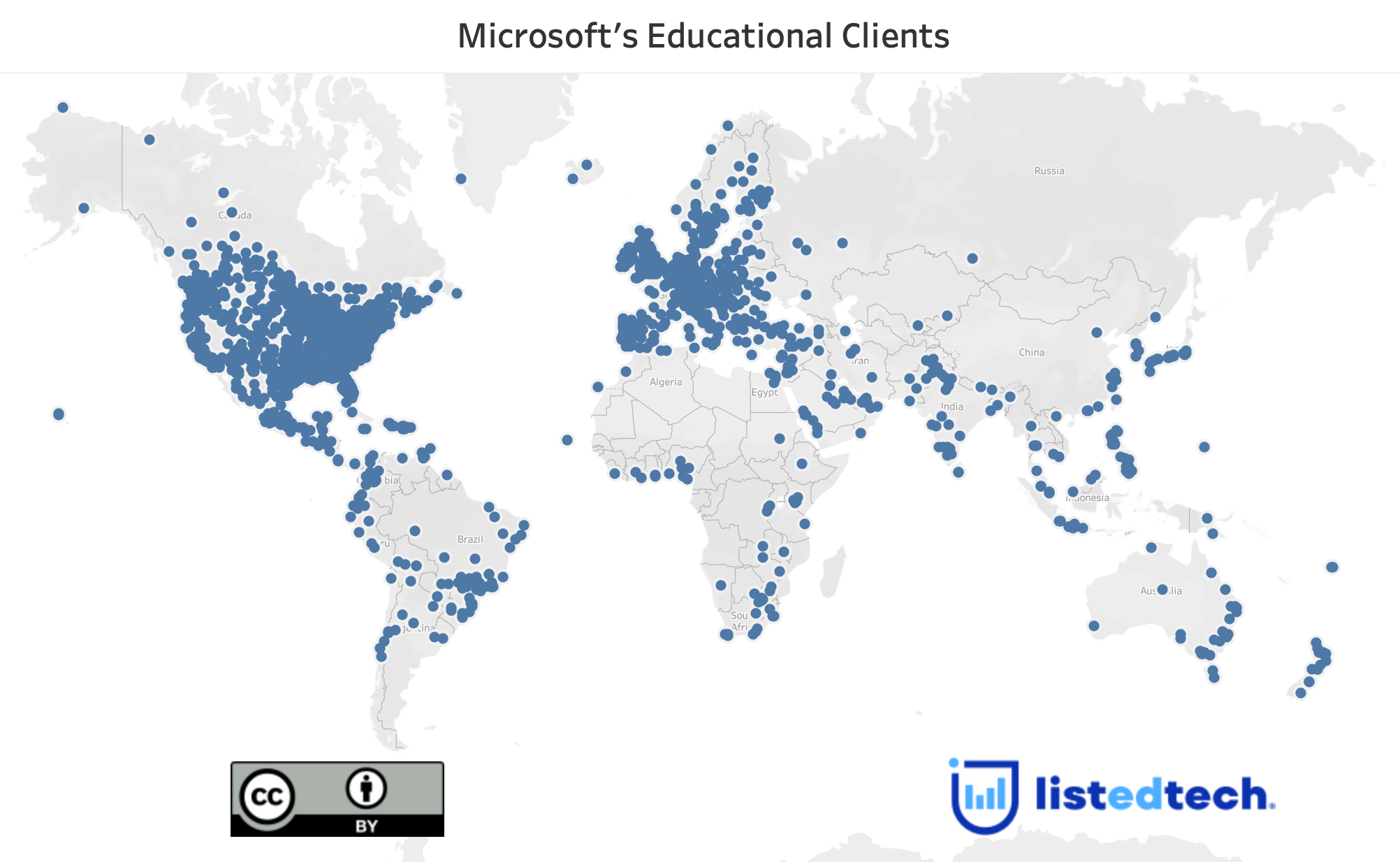 Microsoft is well-known for everything and anything related to computers. Since its inception in April 1975, it has developed software, hardware, and personal electronics and offered services to multinational companies, local businesses, and individuals. However, a component of its core business that has often been put aside is its willingness to help the education world, schools, and students. In this article, we will focus on the company’s history linked to education while elaborating on the different products designed for education or those used in universities, colleges, and school districts.

As a software company, Microsoft is known to acquire several solutions in different product categories to either eliminate competition or to gain more recognition. Among the most significant acquisitions it made over the years, let’s name the following companies that are related to their most renowned products or products that LISTedTECH tracks:

In total, Microsoft bought more than 250 companies and spent over 101 B$ to create the colossal company it is today.

Microsoft bought many smaller companies and startups from the United States (70% of all acquisitions), Canada (8%), Israel (5%), and the United Kingdom (5%). With many startups doing exceptionally well in Israel, it makes sense that this country makes the top 3 in the Microsoft acquisition list.

Looking at some product categories tracked by LISTedTECH, we notice that Microsoft acquired many BI software companies (8), Conferencing solutions (3), CRM (3), ERP (2), as well as other tools that can be used in an education setting (gamification software, private lesson platform, many video game developers).

More than just Windows and Office

With an extensive amount of money dedicated to acquisitions, Microsoft has developed an array of solutions in multiple product categories to keep its position as one of the leaders in the software industry. Let’s go over some of their flagship products in the education world.

When Microsoft noticed that Google was offering K-12 teachers a solution helping them better organize in the classroom, it started to work on a blended learning platform. Like Google Classroom, Microsoft Classroom aimed to support teachers with grading assignments and communications with their students. After its initial launch in April 2016, Microsoft Classroom was quickly retired in January 2018. Despite the mitigating success of the operation, Microsoft decided to migrate many features of this solution into Microsoft Teams within Office 365 Education to create an easy-to-use communication platform.

Talking about Microsoft Teams, this solution quickly became a reference among Microsoft users. Before the pandemic hit the globe, most universities and colleges were unaware of the Teams platform even though it was available for free to all Office 365 Education users since July 2018. After the purchase of Parlano and its chat solution called MindAlign in 2007, the improvement work on Skype for business, and the abandonment of the Slack purchase, Microsoft announced Teams’ launch in November 2016. A few years later, and thanks to the pandemic, Microsoft is one of the leaders in communication platform solutions and has seen incredible product adoption trends.

Teams include several features to support staff and students:

A competitor to Google Scholar, Web of Science, and Scopus, Microsoft Academic is a web search engine for academics and students. Microsoft Research group was in charge of its development. It features the same type of information as its competitors (articles, author information, citations, keywords). The search engine currently indexes over 260 million publications, 88 million of which are journal articles. Even if this search engine is built similar to Google Scholar et al., it mostly focuses on computer science-related literature.

Microsoft 365 is a subscription service offered by Microsoft, which mainly offers its Office suite product line. It also includes cloud storage and productivity tools. It originates from the Microsoft Office suite when it was sold in physical boxes and CD-ROM. Later in its development, Microsoft decided to offer Office on the Web in 2010 for individuals while beta testing Microsoft Office 365 with some corporate users. During the pandemic, in April 2020, Microsoft decided to rename its product to a simple Microsoft 365.

Although a license is still possible to buy (even as November 2021), more people are switching to the subscription plan as it offers automatic updates, enhanced security, and better cloud integration throughout Microsoft products. Microsoft 365 can also be used on several computers (up to 5) compared to a 1-computer policy with the licensed version. Among other changes between the license and the subscription, Microsoft has considerably reduced its support service with license products. For Office Home & Business 2021, it is only 60 days.

As of November 2021, Microsoft proposes three education subscription plans for students and three for teachers, faculty, and staff. Between the two sets, the difference resides in the cost for each plan that is higher for employees.

Microsoft is also very involved in the education of potential future employees. Over its existence, it sponsored many students in disciplines related to computer science and technology in general. In addition to the regular programs proposed by universities across the globe, the Microsoft Learn Student Ambassadors program (formerly called Microsoft Student Partners) offers specific skill training, including knowledge of Microsoft-specific technologies.

The program is available in many countries for university and college students. Students need to apply to the program and, if accepted, they will need to share the knowledge among the academic community.

From the Excel Spreadsheet to Full CRM Capabilities

In smaller colleges, the cost of acquiring a CRM or an ERP system can significantly reduce the budget for other operational needs. This financial struggle could explain why, for many years, Microsoft Excel and Microsoft Access were used as CRM systems for these institutions.

Microsoft worked to propose a CRM/ERP system called Microsoft Dynamics. This product suite is not explicitly designed for educational purposes but can indeed respond to its needs. Dynamics is a software suite built out of several acquisitions:

Power BI is a product that aims to offer visualizations and business intelligence designed with the end-user in mind. It is part of the Microsoft Power platform. In September 2013, it was initially offered as add-ons to Excel (Power Query, Power Pivot, and Power View); it became available to the general public in July 2015. When launched, it was set to compete with Tableau, but has since surpassed its competitor in terms of users: Power BI says it has more than 5 million users while Tableau has around 1.5 million. However, in the education world, Tableau is still ahead of PowerBI. Because of its integration with Microsoft 365, PowerBI is easy to use and integrates data from several sources within a few clicks. For instance, it offers a dynamic connection to Excel spreadsheets.

A portal that can be used in several ways, SharePoint is a web-based collaborative platform configurable to meet any organization’s needs. However, SharePoint is mainly sold as a document management and storage system. As of early 2021, it had over 200 million users across 200,000 organizations. SharePoint is an evolution of two products (Office Server and Tahoe).

With its multiple acquisitions over the years and its undeniable success across all product categories where it is involved, Microsoft remains a staple in the IT world, especially for its solutions used in education.

At ListEdTech, our goal is to help institutions and companies have access to more data to make better decisions. In mid-August of 2022, we made the Portals product category available for HigherEd. Today, we are happy to announce that the K-12 Portal subgroup is now accessible on our portal. Even though we are still working END_OF_DOCUMENT_TOKEN_TO_BE_REPLACED  Read More

It’s been nearly two decades since many of us started using Facebook. Using a social network (or any website) for that amount of time is pretty astonishing. Known collectively as Meta, the world’s most used social network conglomerate now includes Instagram, Messenger, WhatsApp, Facebook, and Workplace. The arc of Facebook’s dominance started off as a END_OF_DOCUMENT_TOKEN_TO_BE_REPLACED  Read More

Are Institutions Buying More From the Same Product Suite?

This post originates from a discussion with a client. He was wondering if an institution tends to select additional products from the same product suite if it were to expand its IT offering. From the data collected at ListEdTech, the answer is that it depends on the product category. For some product groups, we note END_OF_DOCUMENT_TOKEN_TO_BE_REPLACED  Read More